A Stunning Quilt: New to BlockBase+ 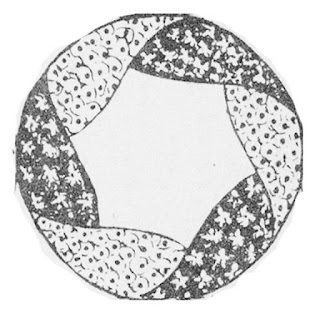 I had this small photocopy of a quilt pattern--- not much information, "A Stunning Quilt" read the headline and it looked like an Alice Brooks/Laura Wheeler syndicated design.

I sent it to the programmers at Electric Quilt. 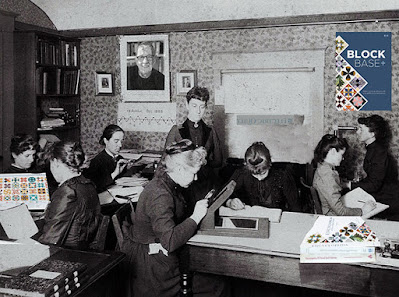 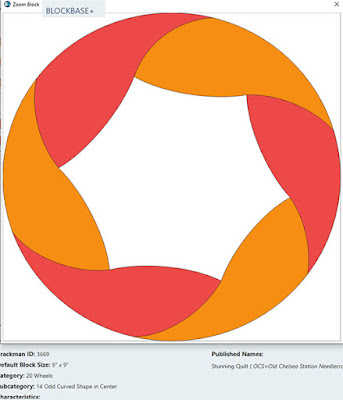 Now that it's in the new BlockBase+  you can print it any size.
#3369 would seem to be perfect for EPP, making
a paper template for each piece, etc.

Here BlockBase+ has drawn the patterns for a 9" block. It's a circle in a square with a six-sided shape in the center. The algorithm gives us a template for every piece. I think of Al Gorithm as a human in the back room to whom I must explain everything. Al usually wins as I have no idea what I am talking about. 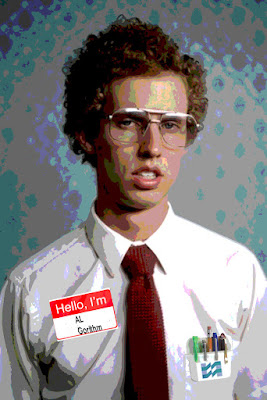 But here I am going to email Al and ask if the corner pieces are not the same and could thus be one template, etc.
When I first started working for EQ I was explaining (trying to explain) the seam allowance concept to the chief programmer. Suddenly a light bulb went off linking sewing land to programming land. "Oh. A simple algorithm!" says he. Me, I says, "Whatever," and went home and looked up the word algorithm (a formula to shorten programs.)
And now we have a simple algorithm called Quilt Layout which gives you a variety of sets for each block. 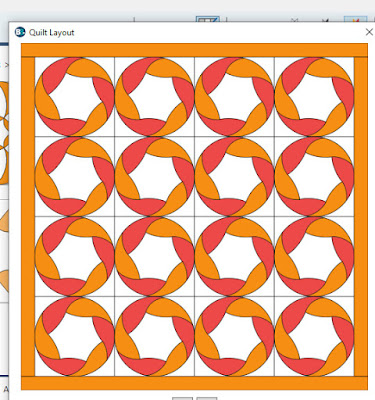 Here is the block set all over in a grid. 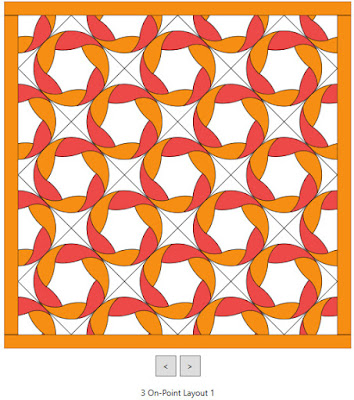 And on point.
Posted by Barbara Brackman at 6:00 AM 2 comments: 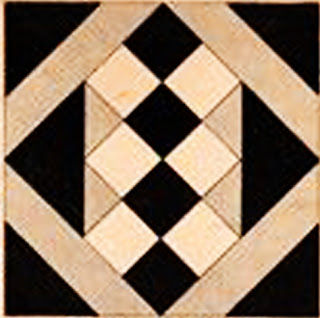 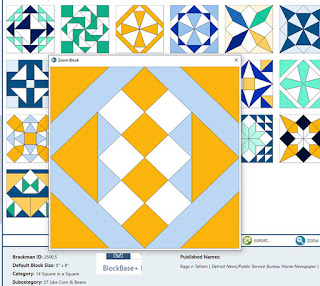 which was not in the old Encyclopedia or BlockBase
so I added it to the new editions (#2005.5). I found the pattern at the Quilt Index
which has a picture of a sheet with a setting and shading suggestion. 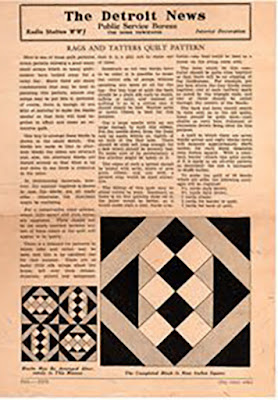 I exported the BlockBase+ file to EQ8 where I could match original shading suggestion by turning every other block and shading in counterchange fashion. What's light in one block is dark in the next. 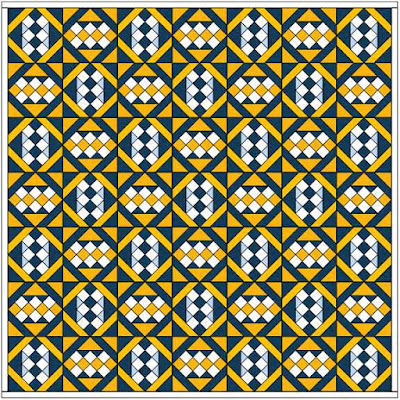 A lot going on visually.

I don't know much about the Detroit News as I haven't had access to many clippings over the years. They competed with a bigger needlework operation in the Detroit Free Press. 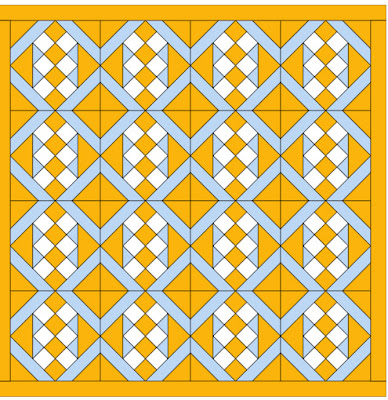 Rags & Tatters is an interesting combination of a Jacob's Ladder sort of 4-patch
with a frame. Here's a BlockBase+ Quilt Layout that shows how
it looks set side by side. 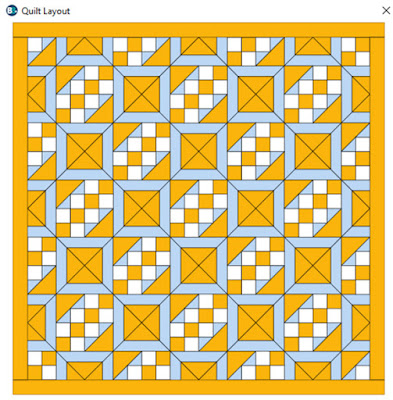 And on point.
Posted by Barbara Brackman at 6:00 AM No comments: 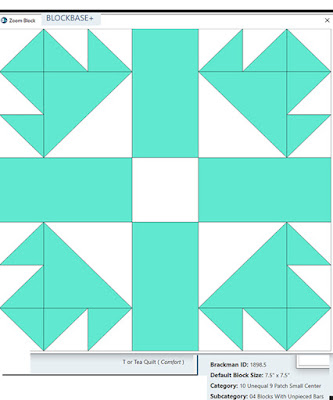 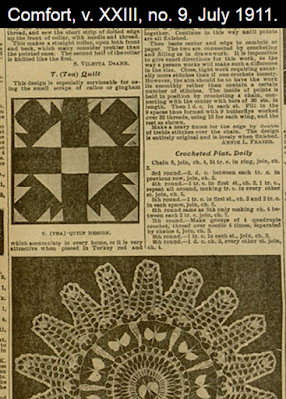 Here's a nine patch I found in Comfort magazine
and added to the third edition of the Encyclopedia of Pieced Quilt Patterns
and BlockBase+. Published in 1911. Found the pattern in Villa Nova University's
periodical collection. 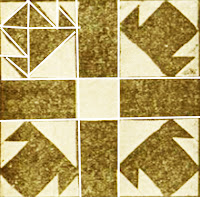 Figured out the seams and sent it to the programmers
at Electric Quilt.

Comfort was a women's magazine, quite popular in its day.
It published many quilt patterns in the 1890-1940 years... 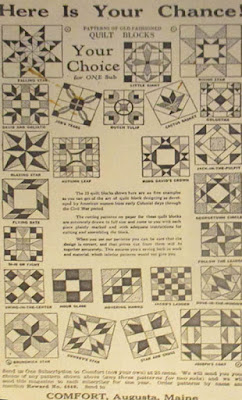 usually picturing the small diagrams used at the time,
this often repeated page published in 1938 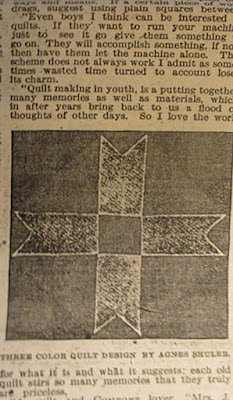 And many times, a bad photo of a block
a reader had sent in. 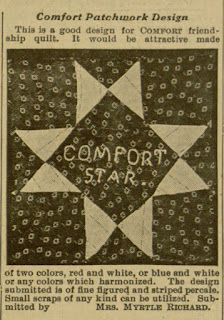 Some better than others, 1910.
But the editors knew what they were doing. Comfort
was the first magazine to have over 1,000,000 subscribers. 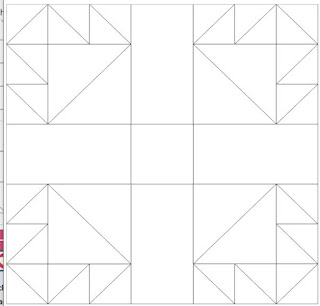 It's not that exciting a block but I thought the name
T or Tea was important to include as it is a possible
reference to the Temperance movement.
I thought I'd do some shading in EQ8 so I exported the design and shaded it with some Ladies' Legacy fabrics. 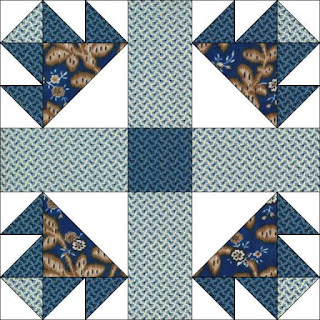 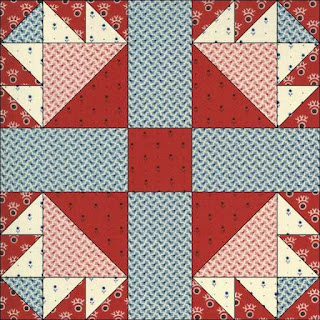 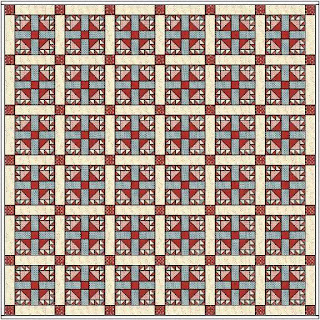 Here it is with 3-inch sashing, the same size
as the center cross in a 12" block. 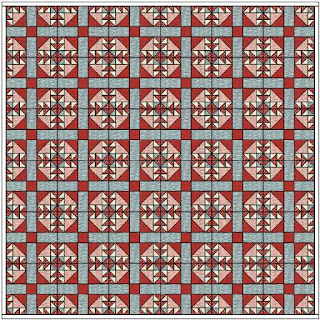 Then I set blocks all over, block to block.
It makes its own sashing
as these 9-patch blocks with a cross in center often do. 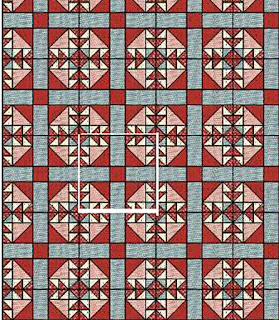 It then becomes a version of this other nine patch---the much more popular Capital T block---with more seams. 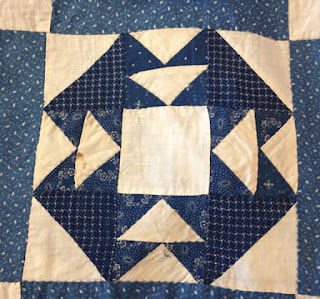 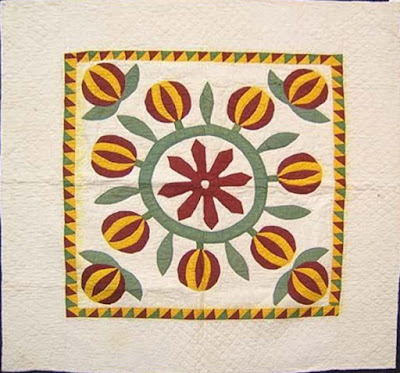 Small quilt from an online auction. Looks to be 20th-century.
A pomegranate wreath. 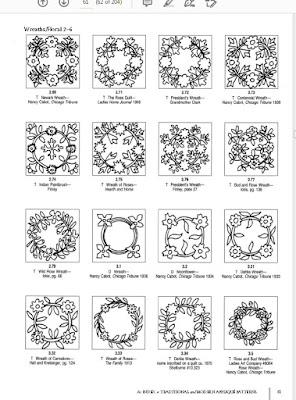 There are a lot of wreaths in my Encyclopedia of Applique
but not this one. 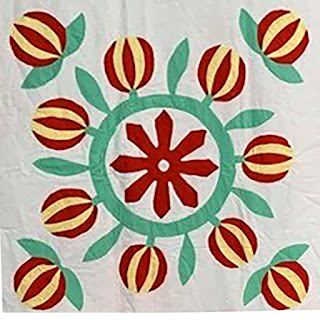 Here's another, 1930-1960?, one of a pair of blocks
40" square.
I'd guess this was a pattern passed around in a small community
in Pennsylvania. 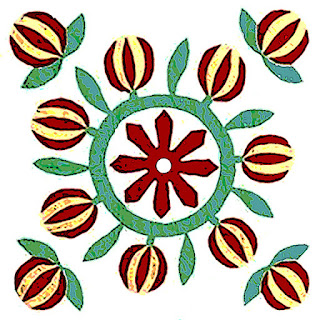 An 8" digital picture for a pattern.
We've been looking at pomegranates over at the Quilt History South Facebook page. Not really a Southern regional pattern. It's actually a classic of design that goes back centuries. Fun to see how quilters used it.
https://www.facebook.com/groups/2427588900863781/
Posted by Barbara Brackman at 6:00 AM 1 comment: