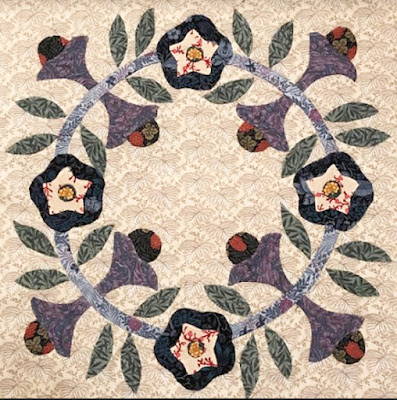 We've started a new applique Civil War Block of the Month pattern over at my Civil War Quilts blog. Last Wednesday's post gave the pattern for the first block in Hospital Sketches: A wreath named for Louisa May Alcott, Periwinkle Wreath (her early pen name was Tribulation Perikwinkle).

See the post about LMA and the pattern here:
http://civilwarquilts.blogspot.com/2019/01/hospital-sketches-1-periwinkle-wreath.html 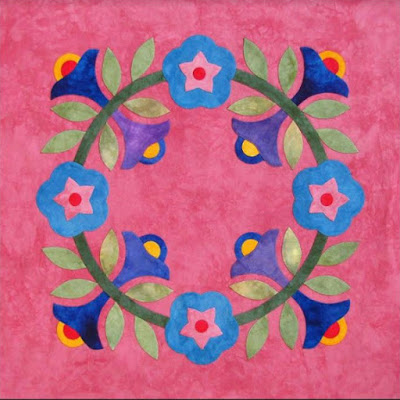 Becky Brown and I designed the applique as a joint project. The Hospital Sketches blocks are based on the most popular designs seen in Civil-War-era albums and this circular pattern is certainly one of the top ten. We modified the traditional design by basing the floral on a five-lobed periwinkle. 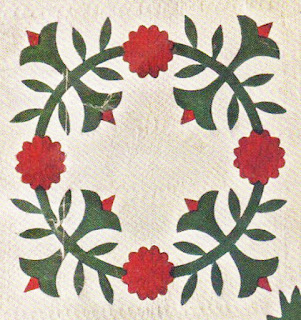 Antique block pictured in a Spool Cotton catalog from the 1940s,
probably from Florence Peto's collection

I looked at a lot of wreaths and found the most typical structure features four florals at the north/south axes, with leaves and/or buds in the corners. Fits nicely in a square block. 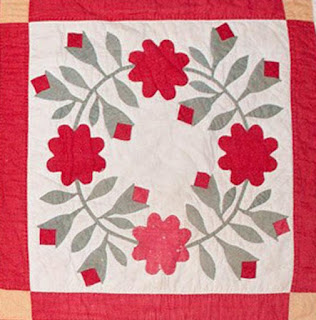 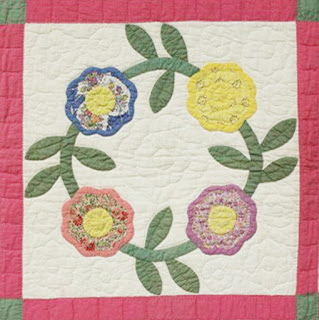 You don't often see the flowers in the corners,
Here's a 20th-century pattern.
Really doesn't fill the block as well. 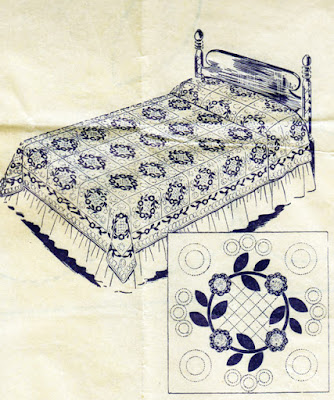 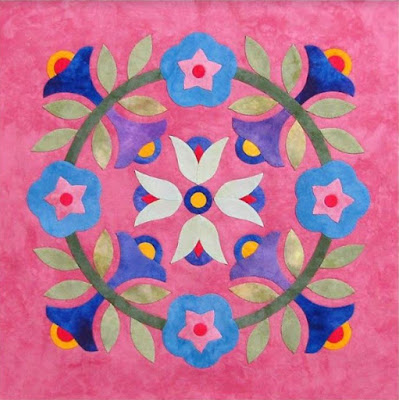 Now that fills a block!
Becky teaches a class in how to make traditional applique your own design
so she filled some empty space here beautifully. 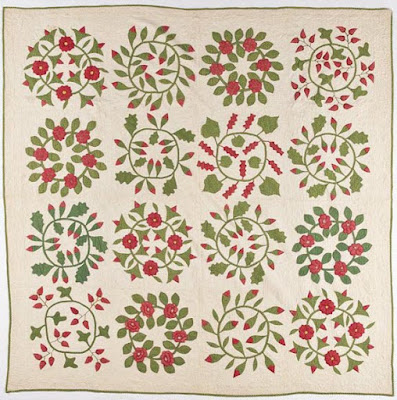 A vintage sampler ---all wreaths.

The Hospital Sketches applique is all about addition and subtraction.
Becky adds, but you could subtract. 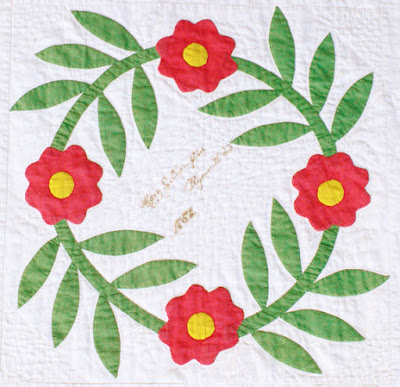 Dated 1852, from Molly at Fourth Corner Antiques
Toss those buds and just do five leaves in each corner 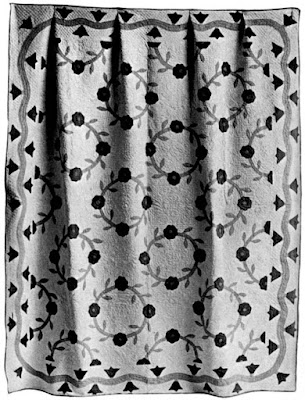 Or three leaves. Isn't modernism all about minimalism? 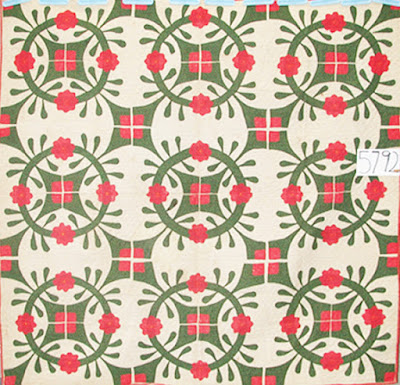 Applied geometry, a wonderfully orderly version recorded by
the Massachusetts project and the Quilt Index. 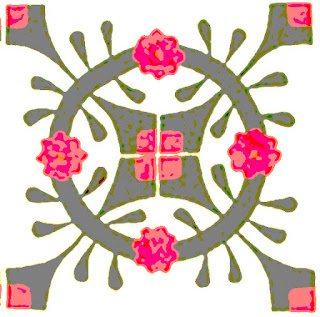 So how old is the appliqued wreath design?
I have several photos from the earliest album samplers with
dates from 1842 - 1844. 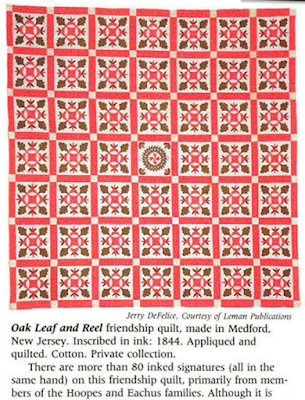 A wreath of leaves is the center feature of this 1844 signature quilt from Medford, New Jersey that was in my dear friend Louise Townsend's collection, now in the Briscoe Collection at the University of Texas. 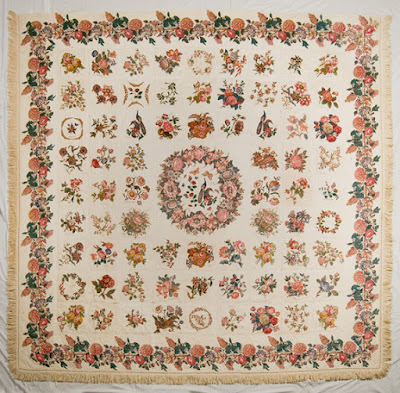 The conventional applique wreaths were possibly inspired by the fashion for cut-out chintz wreaths that flourished in the area about the same time. 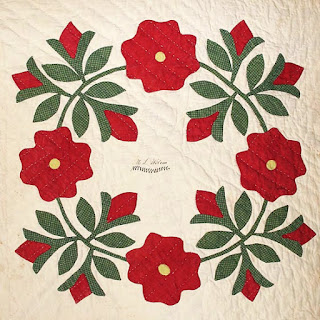 Classic from an 1845 Baltimore album style sampler,
auctioned at Jeffrey Evans a few years ago. 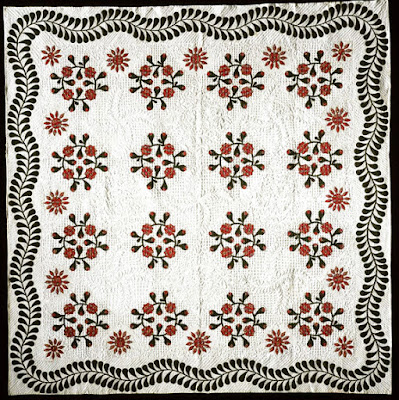 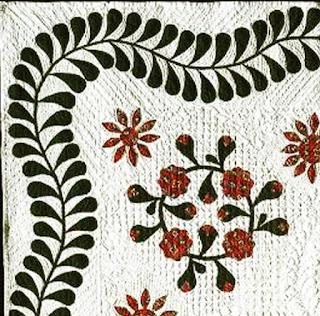 The flowers are on the north/south points in the blocks,
which are set on point.
Greencastle is on the Pennsylvania/Maryland border. 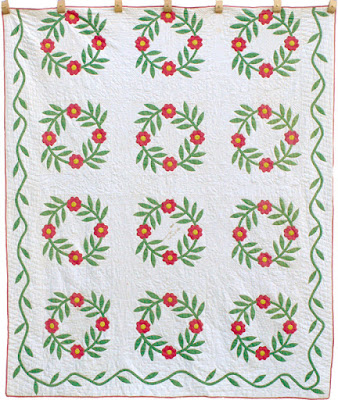 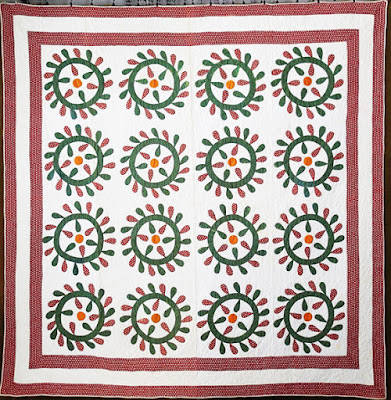