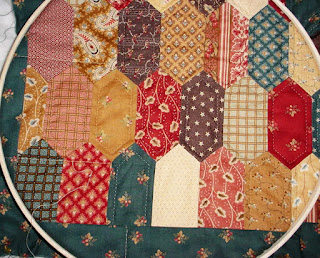 Elongated hexagon charm quilt from my
Civil War Homefront reproduction collection for Moda.
Cindy at the Busy Thimble was hand quilting it in this photo. 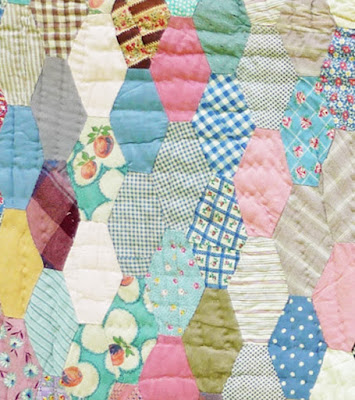 Hexagonal shapes tessellate well, filling the plane with one shape.
It doesn't matter whether hexagons have equal sides
or some sides longer than others. 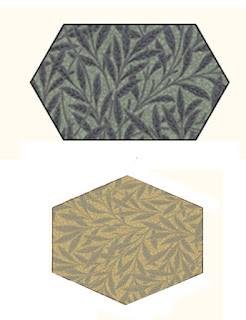 BlockBase #172 and #173 were described as coffin shapes by Averil Colby in her book on British patchwork. 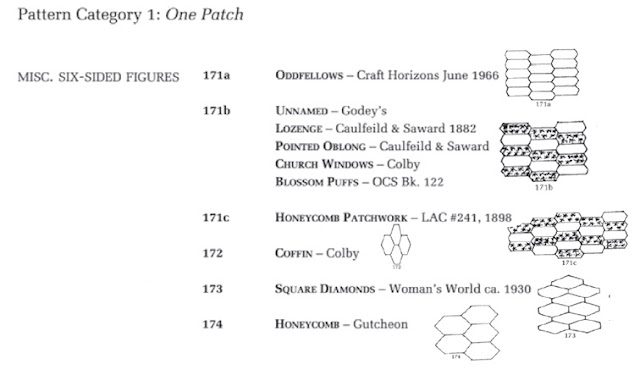 Here's a page from my Encyclopedia of Pieced Quilt Patterns.

In one elongated hexagon you could say the point is on the end. 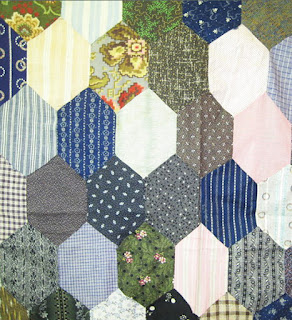 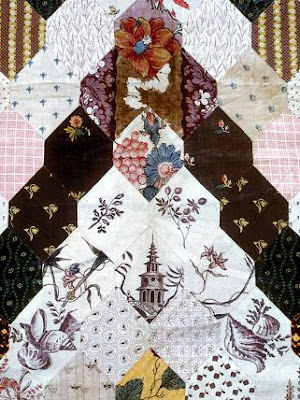 The quilt pattern goes back a long way.
The above detail is from the Taunay family quilt in the collection
of the Smithsonian Institution. It was probably made in the West Indies about 1800-1815.
http://americanhistory.si.edu/collections/search/object/nmah_556536 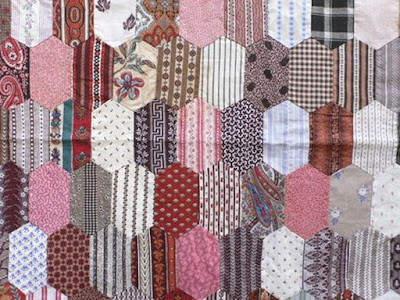 This hexagonal shape was also relatively popular as a tessellated charm quilt in
the 1870-1900 period. 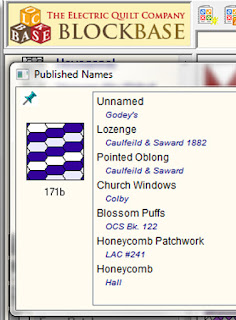 Names, depending on the proportion of the shape, included Lozenge and Pointed Oblongs from Caulfeild & Saward's 1882 English book on needlework and Church Windows from Averil Colby. 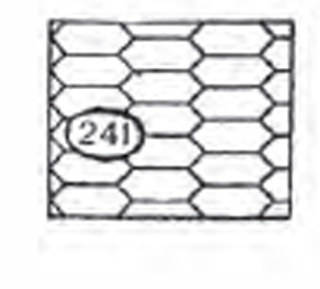 In America the Ladies Art Company called it Honeycomb Patchwork. 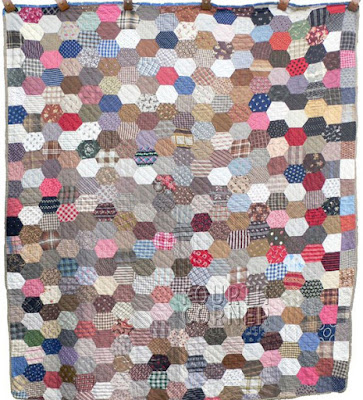 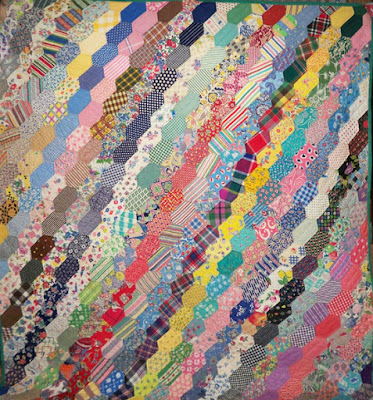 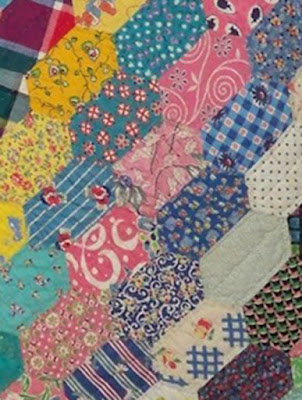 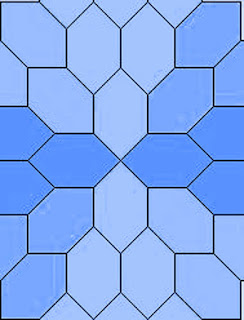 This shape will fit together in a variety of ways
with no gaps, 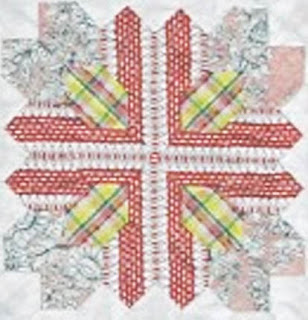 Something English quiltmaker Lucy Boston figured out in the 1950s. 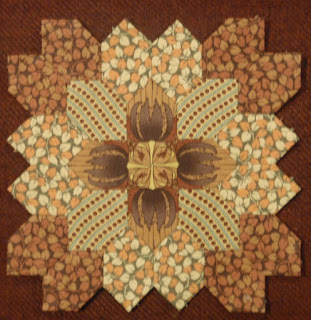 Robyn's block from her PP blog. 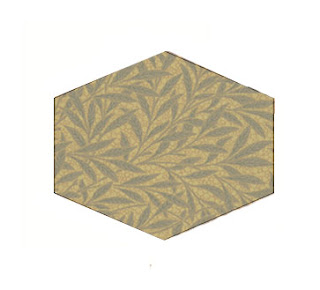 The other six-sided shape might be described as having blunt ends. 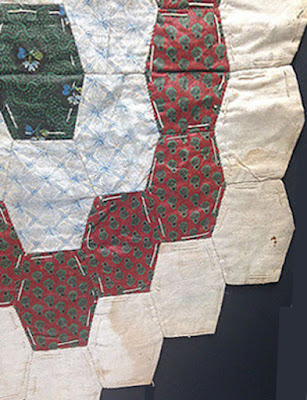 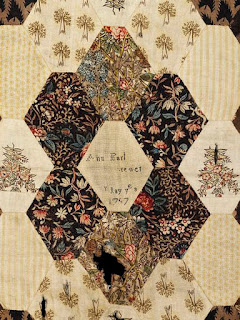 This is among the earliest hexagon patchwork spreads and as the catalog says:

"The pattern is formed from equal sized (but non-rotational) hexagons radiating outward from a central point." 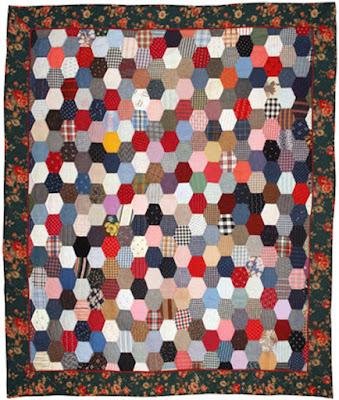 You do see this shape in American charm quilts
after 1870 or so. 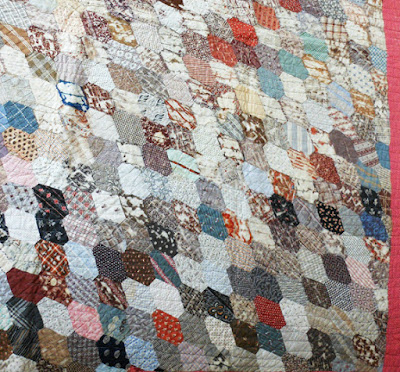 Some skinny, some chubby. 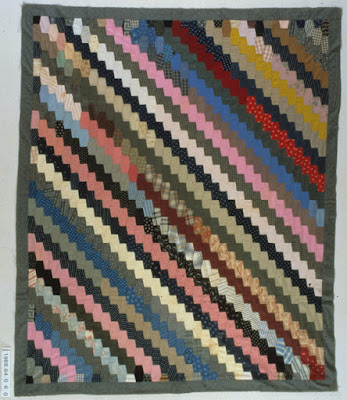 From Mary Barton's Collection
Quilt Index
And some lined up nicely 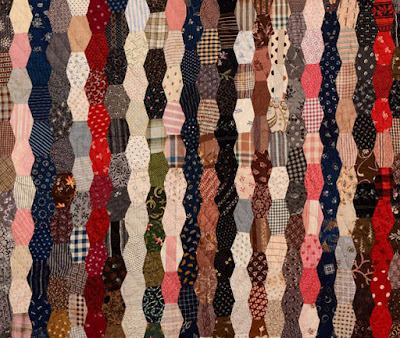 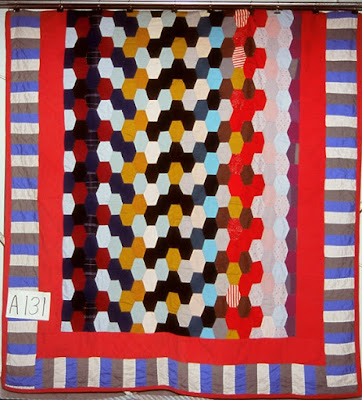 From the Wisconsin project and the Quilt Index.
This one looks to be from the mid 20th century. 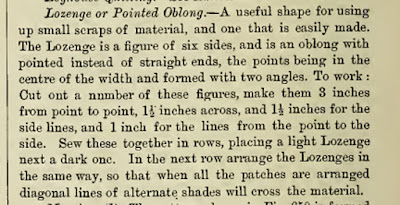 Caulfeild & Saward didn't include a picture in 1882 when
they gave instructions for a Lozenge or Pointed Oblong.
Imagine trying to figure out what they were talking about from their description. 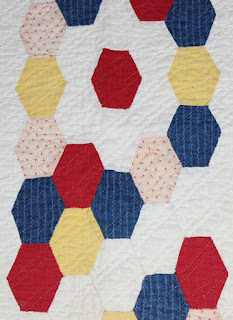 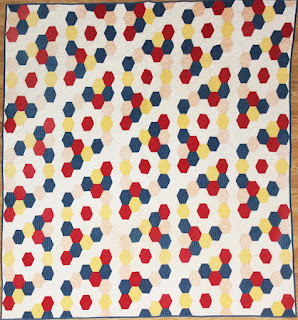