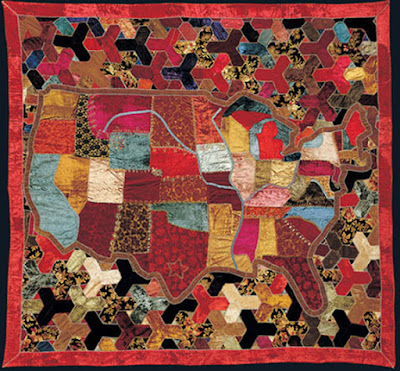 This map quilt (1) in the collection of the Museum of American Folk Art
is on exhibit at the Crystal Bridges Museum in Arkansas this summer. 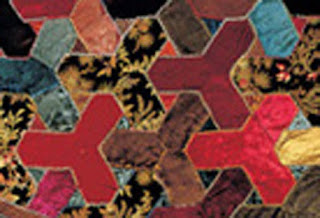 The photo gave me a chance to look at the background pattern,
which is a sophisticated pattern that is not in my pattern indexes. 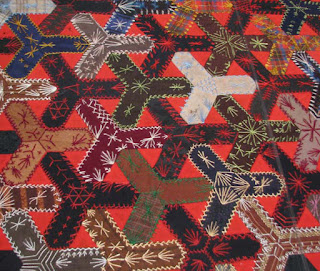 The Bowers Museum has another example
they call a Crazy Quilt (2), which it's not.
But it could drive you crazy. 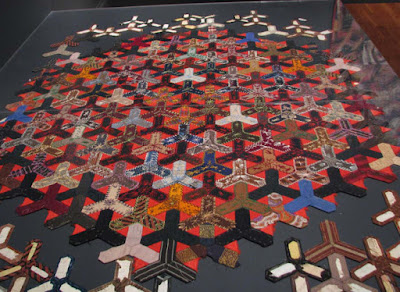 They showed theirs a few years ago laid out on a table.
It's not finished. 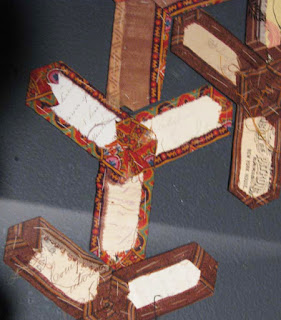 It's two shapes pieced over paper.
One shape is a long hexagon.
The other is a triangle. 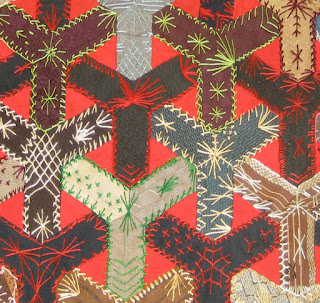 (2)
I guess you put this together one triangle and one hexagon at a time with a lot of Y seams and a lot of long hexagons flapping around waiting for the next pieces. 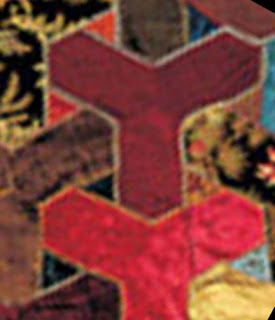 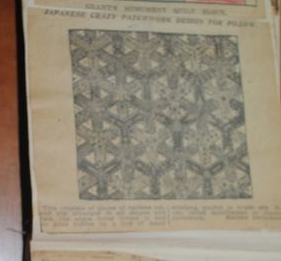 I found a tiny photo in an old quilt scrapbook on line. I can just make it out that it says "Japanese Crazy Patchwork For Pillow" at the top. It's not really crazy. Crazy means no regular pattern. This is one regular pattern.

It's not in my Encyclopedia of Pieced Quilt Patterns or in BlockBase. 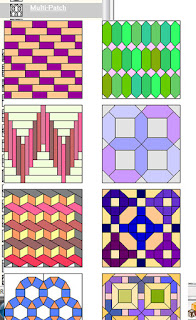 If it were it would be in this area of MultiPatch patterns
in the six-sided shapes plus. 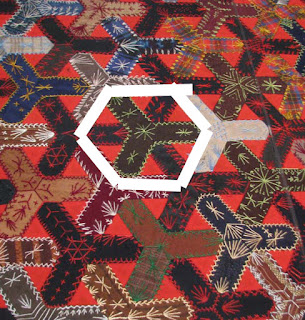 I've been trying to figure out how to stitch it without so many Y seams.
But it wouldn't look the same.
It's be an interesting design but not as complex. 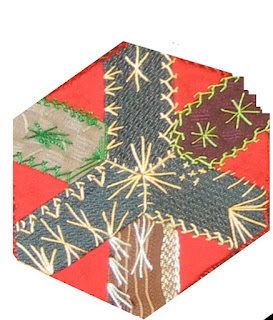 So I gave up.
Unlike other people 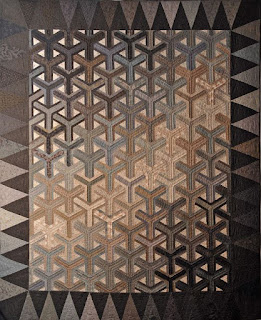 For example: Sabina Schröder showed her version at the 2016 European Quilt Championships.
http://www.textile-festivals.com/oeqc2016/en/english-guest-collections/ 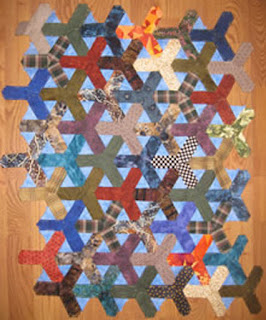 Chris Lapham wrote me a note in a blog comment here in 2013 and now I realize this pattern from the Bowers is what she was asking about.


"Hello Barbara, Chris here... In my search to find out a quilt pattern name I have been lead to you... I have tried to up loaded a picture of a quilt I have been working on "here and there" LOL! so that you can see the design, but for some reason it will not load... It is 2 shapes 1)an elongated hexagon that forms a "Y" shape and 2)a filler triangle. A quilt appraiser looked in your quilt block reference book and it is not shown. It is very portable due to using an English paper piecing method. I saw the "original" quilt exhibited in a museum about a year and a half ago (origin dates around 1880s). The docent for the exhibit allowed me to trace the two shapes so that I could try my hand at recreating the quilt. What was phenomenal about this quilt was after the top was pieced, the creator then embellished the quilt as you would a crazy quilt. It was utterly stunning. (Have not started that part just yet) Actually the original quilt top was not completed, I think as the top grew, the quilter got bored with piecing and started to embellish as she went along to change up the pace of creating the quilt... at its’ point of “Completion” it was a little larger than lap size... I think she\he was very close to completion. As I said, it was stunning!!!!"

So, Chris, at last a name. Japanese Crazy Patchwork for Pillow....

UPDATE: BlueMothDoings posted her pattern for a similar version and the best thing is because she added a seam you can organize it into triangular units. In her version the long piece is 5 x the red triangle. Thanks, Neame, for the links:

Has anyone ever seen another vintage version? 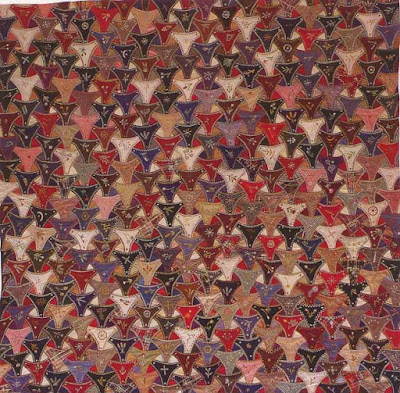 From the Minnesota Project. By Kate Wise, Stevens County, Minnesota

And then there's this one. Curves on the triangles and the six-sided shapes.
Y seams galore.