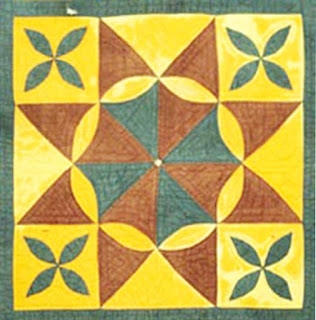 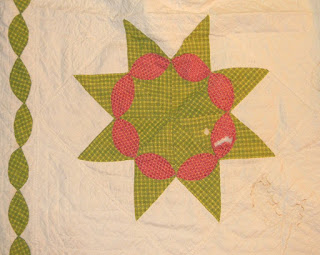 Vintage quilt, perhaps 1860-1890
Sandra Starley and I have been Facebooking about this design,
which we are all calling French Star. 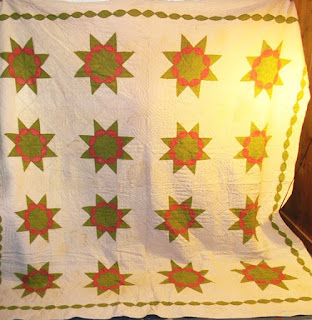 It's not in BlockBase in this format,
which is an 8-point diamond star with a curved pieced in the center. 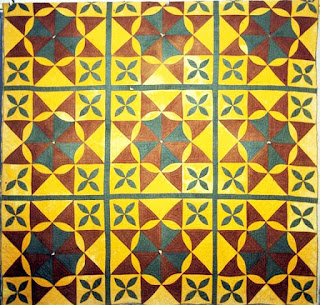 Here's the North Carolina quilt again. It's a perfect example of regional taste with the solid-color cottons seen in the South after the Civil War.---a warm brown substituting for what might once have been Turkey red.  The applique corners might have been cut from the same template as the Lemon Drops in the star points. 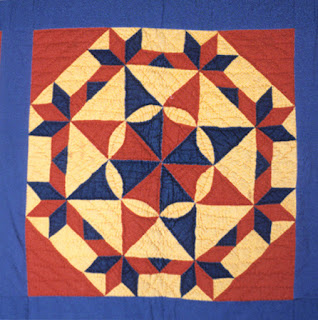 Some showing off in North Carolina made by
Mary Louise Harris
The NC Project found this quilt in Pitt County.
http://www.quiltindex.org/fulldisplay.php?kid=4B-82-BD2 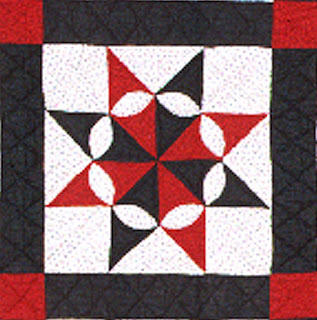 Collection of the North Carolina Museum of History
Another North Carolina quilt from Wake County, about 1900.
Seems like it was a regional favorite.
http://www.quiltindex.org/fulldisplay.php?kid=4B-82-408 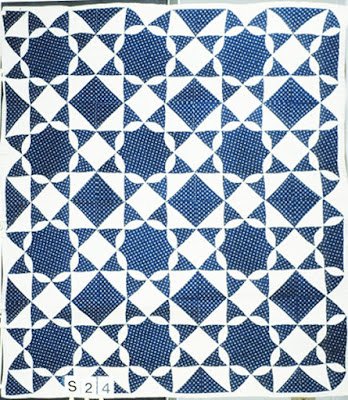 Elizabeth Jospehine Blegen added a seam in the corners.
Late 19th-century, made in Iowa according to the Iowa Quilt Project.
http://www.quiltindex.org/fulldisplay.php?kid=4B-82-408 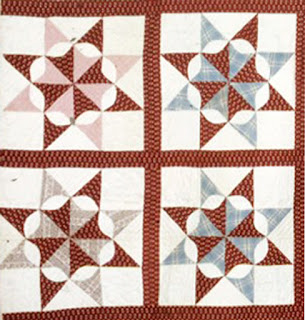 The Connecticut project found one from about 1900.
See the whole quilt at the Quilt Index.
http://www.quiltindex.org/fulldisplay.php?kid=47-7B-F0D 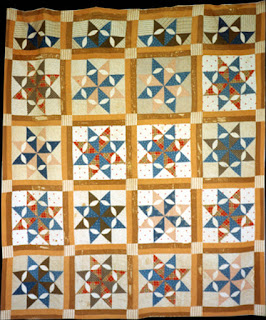 Lula Ransom Golson made this one in Louisiana in the early 20th century.
From the Louisiana project and the Quilt Index.
http://www.quiltindex.org/fulldisplay.php?kid=1B-3A-766 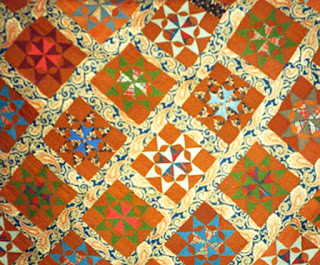 Another impressive late-19th century version from the Kentucky Project and the Quilt Index.
The vivid colors made me think it was wool and the records do confirm that---perhaps those printed delaines from the mid-19th century.
http://www.quiltindex.org/fulldisplay.php?kid=1A-39-2FC 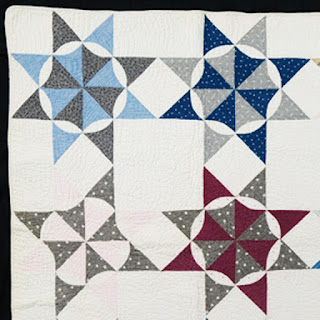 The International Quilt Study Center & Museum owns a classic from the 1890-1920 era in the grays, blues and dark reds so popular at the time.
Do a search for #2012.013.0013:
http://www.quiltstudy.org/collections/search.html
The one above looks like it's not constructed in blocks. The large white squares have no piecing in them. I believe this is the same quilt recorded by the Minnesota Project several years ago.
http://www.quiltindex.org/fulldisplay.php?kid=49-7E-2AD 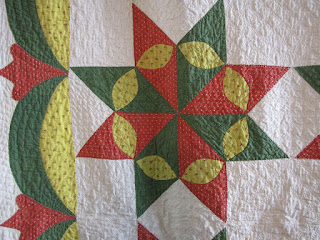 This is Sandra's quilt
from 1840 -1870. It has the curved lozenge piece in
chrome yellow print, something Joe called a Lemon Drop. 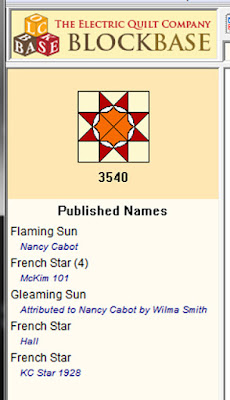 The variation we most often see has a different center shape. It's BlockBase #3540 which Ruby McKim published as French Star in the Kansas City Star in 1928. Fewer seams meeting in the center. 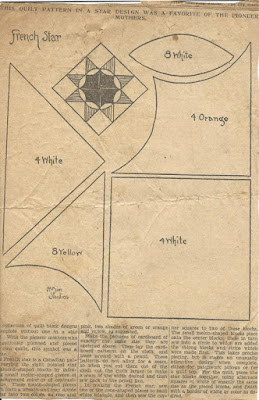 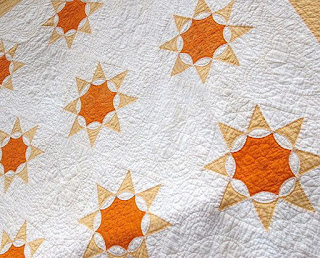 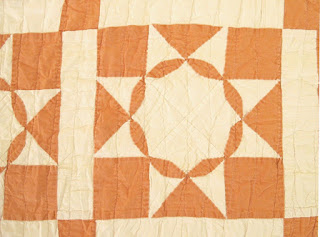 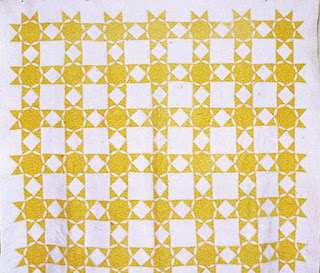 From the Wyoming Project
http://www.quiltindex.org/fulldisplay.php?kid=51-8C-9A2 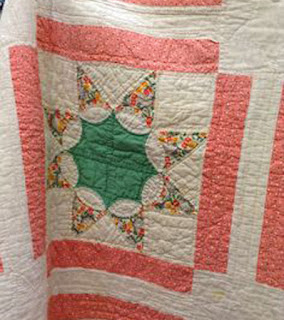 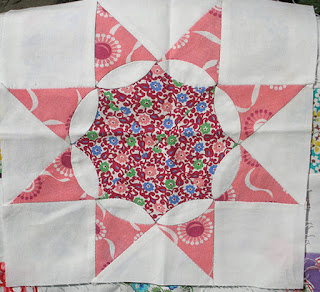 Or at least a block. 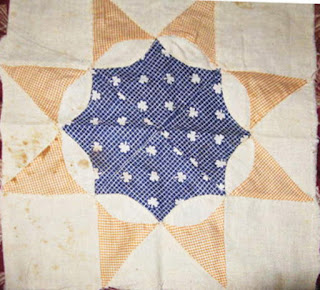 Many of these are online auctions or orphan Pinterest posts. 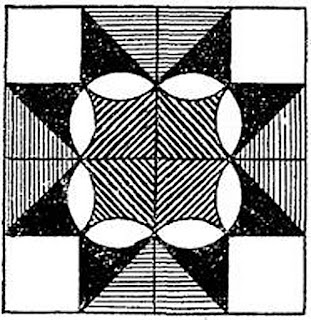 A Nancy Cabot pattern from the Chicago Tribune in the 1930s.
Winding Walk 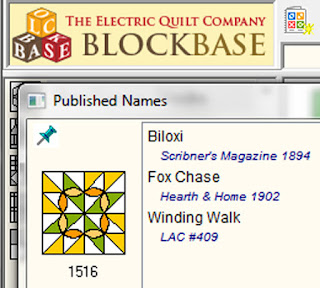 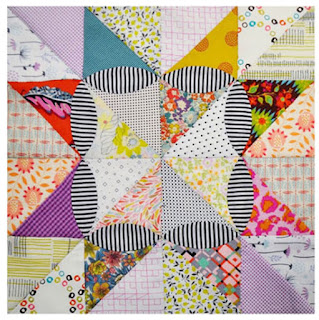 UPDATE: I see Jen Kingwell has done plastic templates for this block. 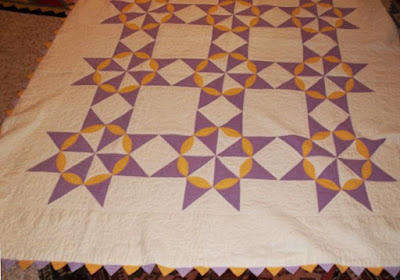 Here's one from the 1930s that is more like the 19th-century version.
Eight pieces in the center of a star block so you can alternate colors 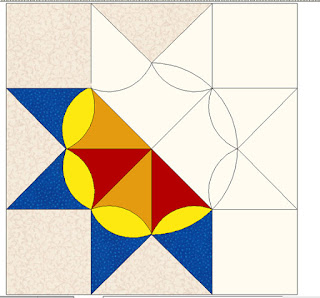 I imported McKim's French Star into EQ7 from BlockBase. Then I added quite a few more points to the drawing board. I puffed out the curved pieces and drew in some more lines and colored it lemony,
so it would look more like the 19th-century designs. 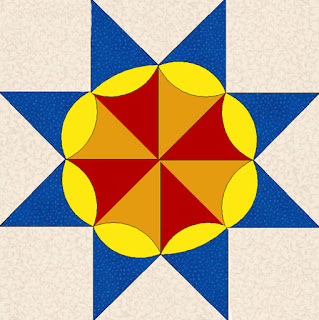 12" Block
The free pattern below is for one of the puffier star points.
Add Seams. Cut 8 lemon drops and 16 diamond points.
The side of the diamond should be 3-1/16" long.

You might check the outside points and the inside points to make sure they are the same. (They look like it.)

Cut the triangles as a 7-1/2" square and cut into 4 triangles with two diagonal cuts.

If you'd rather draw your own templates just take a compass and add the curved piece to any 8-point diamond star.

And you could always applique that Lemon Drop.

More here:
http://www.earlywomenmasters.net/quilts/f/french_star/index.html
Posted by Barbara Brackman at 6:00 AM