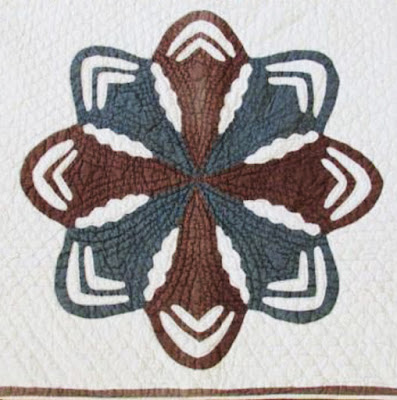 Quilt from eBay.
An unusual pattern.
Classified as 8 identical arms in the design elements.
There aren't a lot of these 8-armed designs as
they don't fill up the square block too well.
The corners are empty. 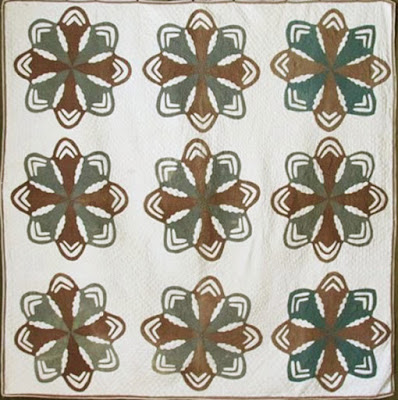 This design is quite familiar to pattern historians
as a regional Southern design from the last half of the 19th century.
The North Carolina quilt project gave it the generic name
of  Plume Circle Design. 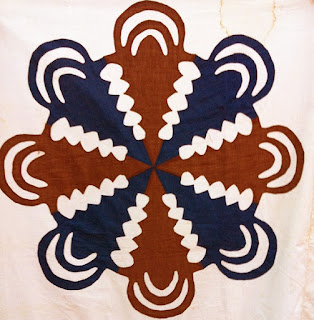 Very similar quilt from Cindy's antiques.
Often done in two colors, solids---prints rare.
Reverse applique slashes in the spokes, usually two curves.
It looks like the pattern might be cut from folded paper like a snowflake. 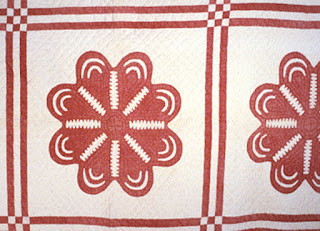 But it is amazing how close some of these are indicating that
an actual pattern was handed around.

In my Encyclopedia of Applique it's #15.31
My source called it Snowflake but what
that source was I don't know. 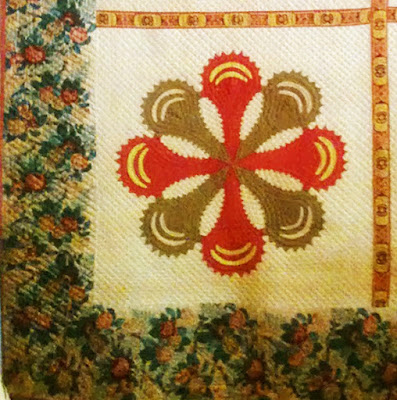 This one looks to be mid-19th century. It is one of four
in the collection of the Lexington County Museum in South Carolina.
A little extra: a pinked edge along the outside of the petals. 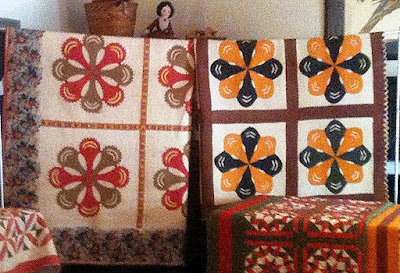 They showed all four a few years ago. 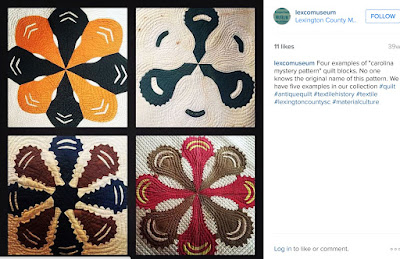 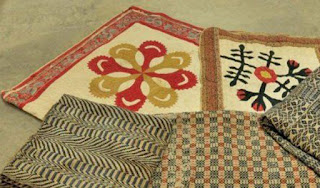 A lot of bedcoverings in an auction.
The print border is uncommon.
One slash per petal unusual too. 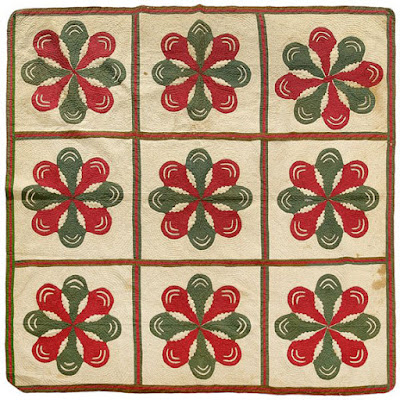 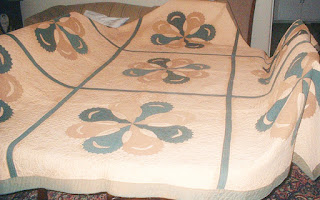 The fabrics are often prone to fading. 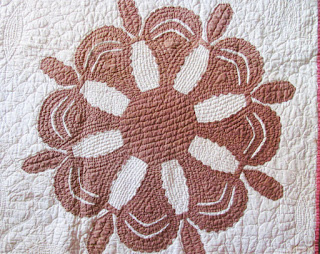 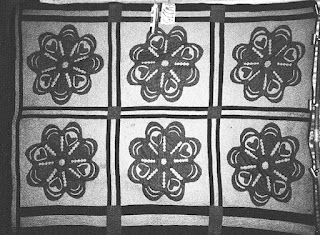 And one documented by the North Carolina project
with hearts. It was photographed in black & white.

The same quilt, I bet, in blazing color. 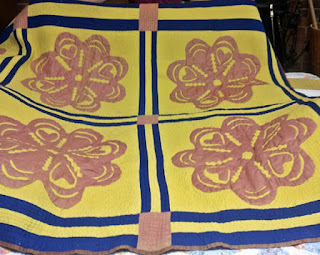 I found this photo at a guild show n tell I think.
Heidi brought it, saying it was from her
husband's family and it had a North Carolina project
label on the reverse. 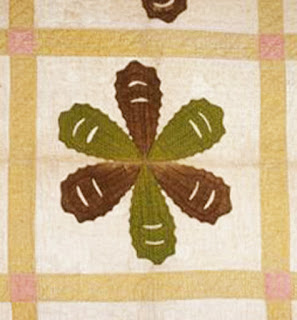 Some examples have 6 arms rather than 8 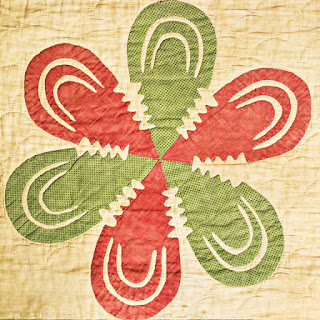 The Charleston Museum showed this quilt in 2008.

The Press Release for the exhibit stated:

"Providing an unusual twist on the floral theme is the Sundew quilt made in the mid-19th century. Each square bears an unusual appliqué and reverse appliqué motif based on the Sundew or Drosera plant. 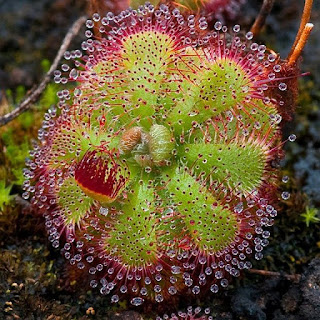 "These pink plants lure, capture and digest insects using tentacles covered with glistening drops of mucilage, resembling drops of morning dew. The plants are found in boggy areas in many parts of the world, but this quilt pattern has only been found on central South Carolina quilts (Lexington area)."

Oh, that must have made them mad in North Carolina. And Tennessee and Georgia. But I digress.

Sundew's a good name but it would be nice to know the source for the name. Did it come with a  quilt? 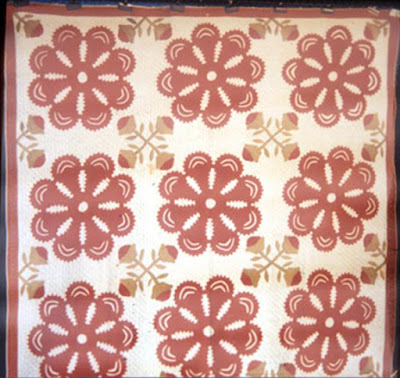 Another design option is to fill up the square block with additional flowers in the corners as Larushia Holman did. Her quilt was found in Tennessee. The family said:

"The quilter made this quilt to show.
It won blue ribbons in county fairs.
The maker, earlier in life, had connections with North Carolina." 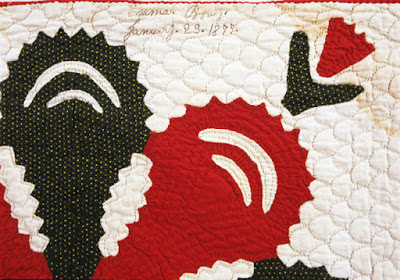 A tulip-like design added to one signed & dated and found
in the North Carolina project. 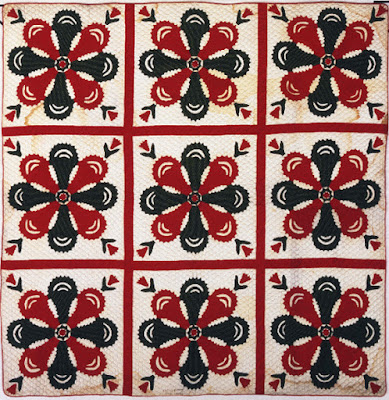 Erma Kirkpatrick and the other North Carolina historians
showed several regional designs in their chapter on applique in
North Carolina Quilts.
This one they called a plume-circle quilt.

"The pattern seems to lack a traditional name."
But one NC quilt owner called it Wonder of the World or World's Wonder. 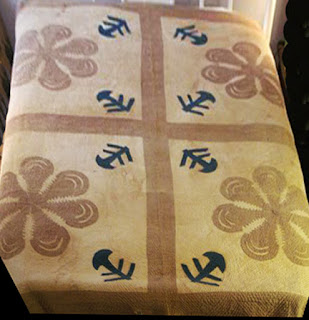 The variation with the corner designs have a different number
15.93. 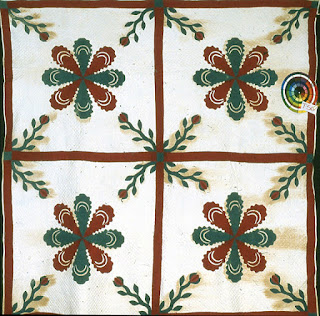 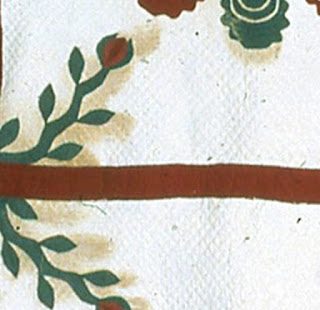 Another digression. Note how that greenish blue dye
is migrating in terrible fashion. I'd guess hot storage
might aggravate that migration. 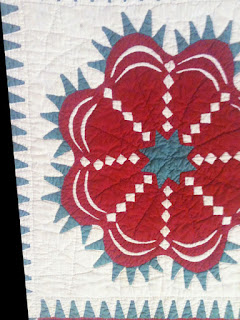 Very fancy variation.
No number
Posted by Barbara Brackman at 6:00 AM