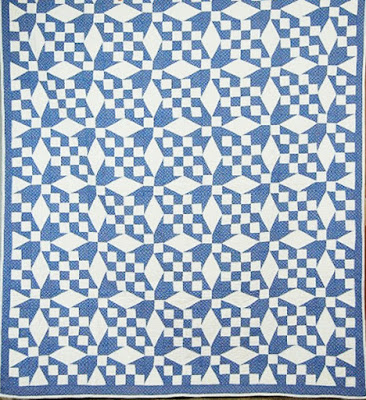 Mid-20th-century quilt from an online auction

The pattern is mysterious at first---all those checkerboards and tulip shapes. 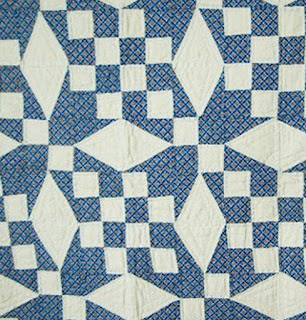 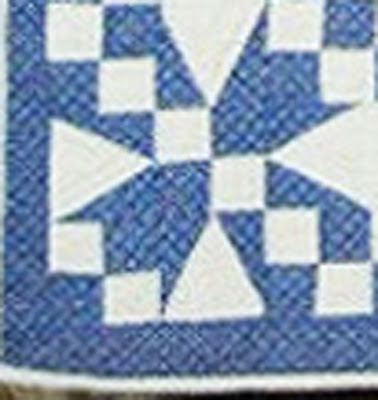 But if you go to a corner you can usually find the repeat block. 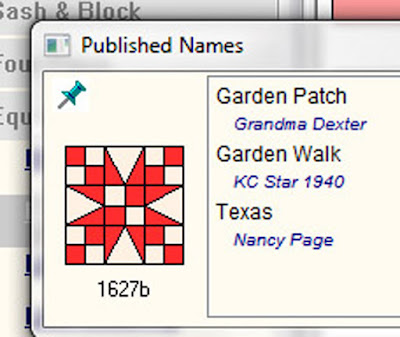 It's one of those nine-patch stars with long, spiky points that I've been posting about. 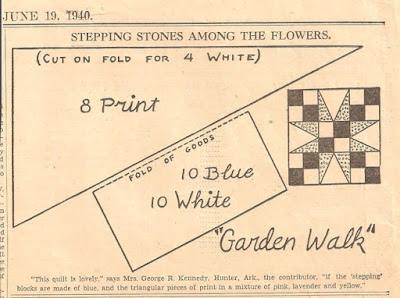 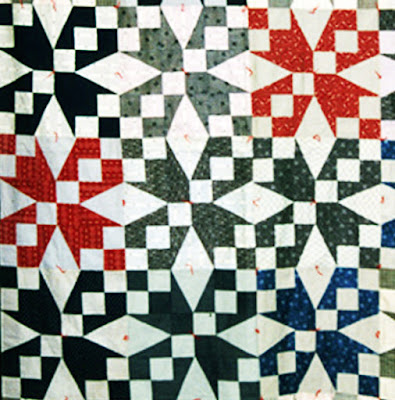 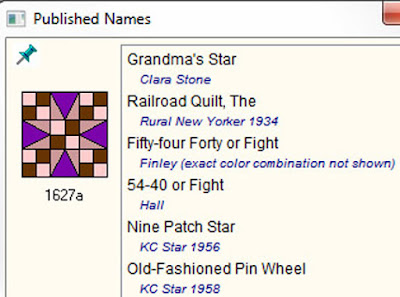 It seems to have been a popular pattern in the 1890-1920 period
when these gray, black and navy blue prints were also popular. 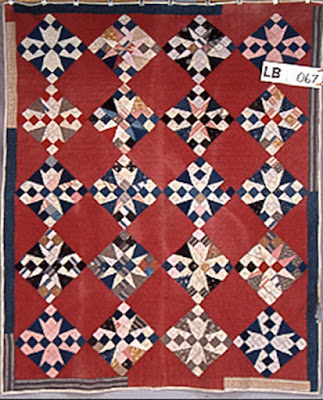 From the Iowa Project
A typical example of turn-of-the-century style. 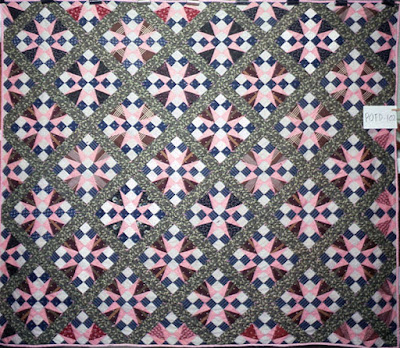 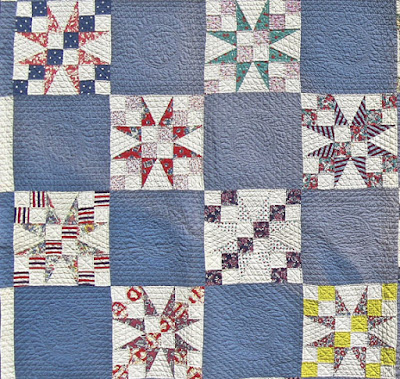 Ruth Finley told us in her 1929 book it was called Fifty-Four Forty or Fight, without any further discussion. Quilters have assumed the name refers to a political slogan about a U.S./Canada border dispute in the 1840s.

The Moore About Nancy blogger recently wrote about this pattern, published with that name in 1933 by Nancy Cabot in the Chicago Tribune.

"Nancy Cabot however refers to it as a battle between Russia, England and the U.S over Alaska in 1884! I'm not sure what she is talking about. She also mentions that women of the period (1844) 'had no effective outlet for their political opinions' and that this block is the 'spontaneous expression of patriotic American women'."

All which is pretty typical of the historical myths that quilt pattern writers like Finley and Loretta Leitner (Nancy Cabot) relied upon to fill up space. 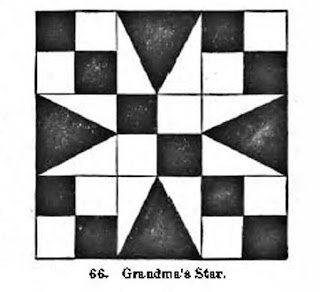 The pattern just is not that old. The earliest publication I've yet found is in the booklet published about 1910 under the name Clara Stone, where it's called Grandma's Star. That may be the source for those blue, gray and black quilts from the era. 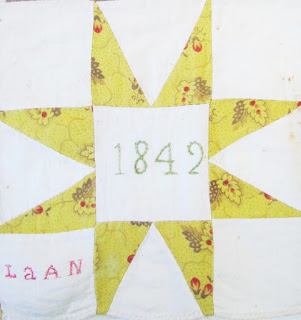 Finley may have been thinking of the basic spiky-pointed star, this
dated example from a pair of Lancaster County, Pennsylvania pillow cases. 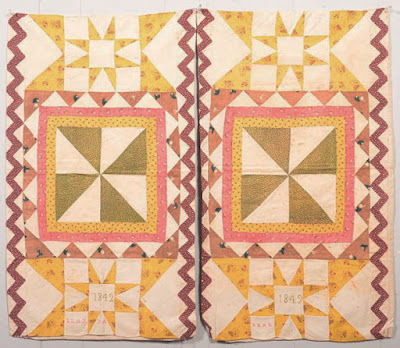 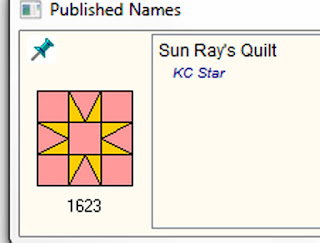 But that basic pattern has no checkerboards in corners or center. 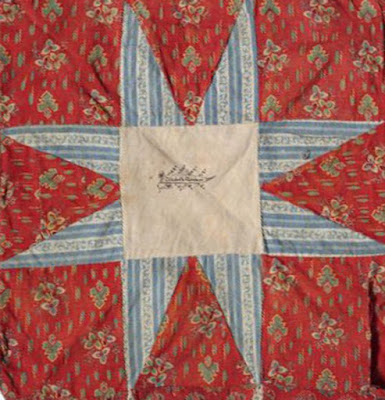 From a set of blocks dated 1843 in the Philadelphia Museum of Art.

The default name for the block with 5 four-patches and a spiky star is
54-40 or Fight.
No one calls it Grandma's Star or the Railroad. 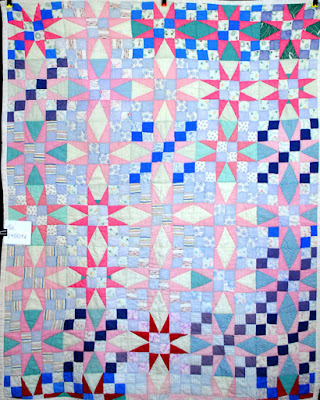 Emily would not be thrilled to see how her mid-20th-century quilt has faded but it gives one ideas about making some of the stars dominant and others background.

Here's a link to a free 12" pattern.
https://www.quiltingcompany.com/Quilt/pattern-54-40-or-fight-lap-quilt/

I imported BlockBase 1627b into Electric Quilt 8. 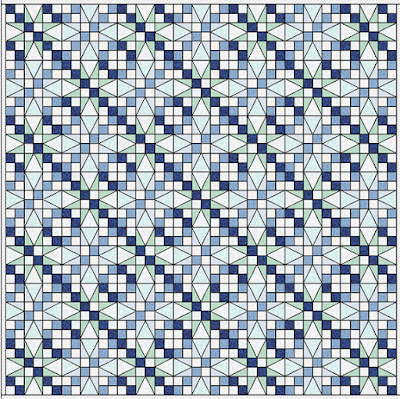 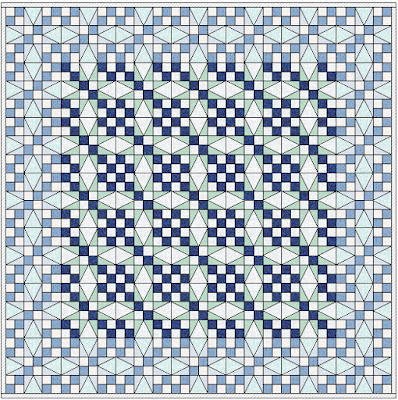