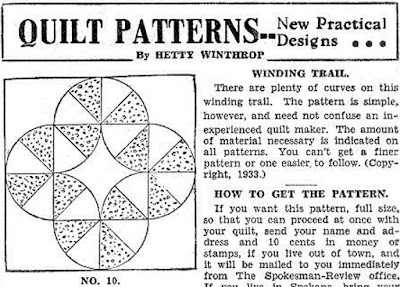 Hetty Winthrop patterns, which ran in a few newspapers in the early 1930s, have not been well documented. The pattern above is the only Winthrop design in the Encyclopedia of Pieced Quilt Patterns & BlockBase.

And it's not drawn the way Hetty showed it. 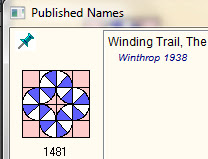 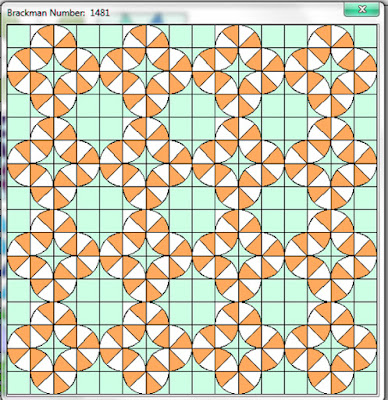 I searched through Newspapers.com looking for Hetty's patterns and found quite a few, mainly in the Spokane Spokesman Review in 1933 and 1934. 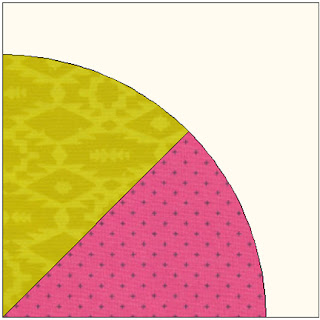 I redrew her basic block so it's more pieceable. 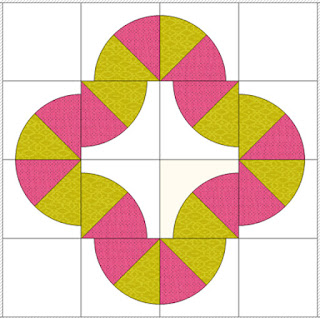 But aside from the design above, Hetty's patterns weren't that innovative. She seems to have lifted liberally from the other pattern designers of the time. 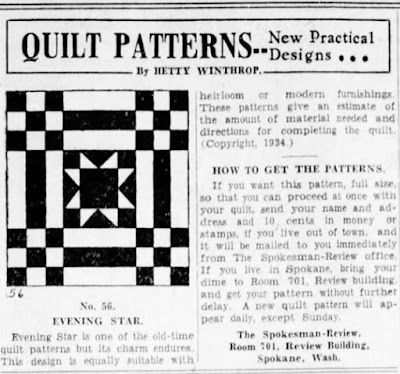 Rolling Pinwheel from the Salt Lake City
Deseret News in 1934 was a Ladies Art design under
the same name. 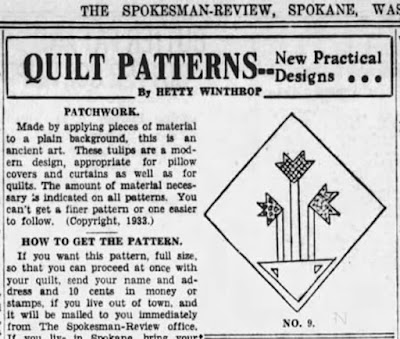 I found a few that look to be original, but they worry me.
Hetty seemed to know very little about putting a quilt together
so it's just as well she was copying from other sources. 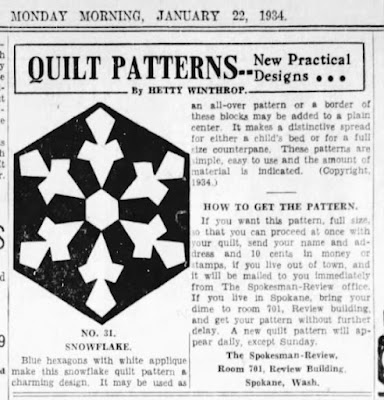 Snowflake is to be appliqued of white shapes onto blue.

Seth Thomas Rose is copied story and all from Ruby McKim, with a few incorrect facts. Araminta Kreeger (not Kreeker) brought it to Missouri, not Kansas. 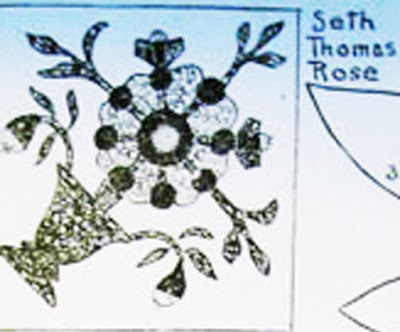 So who was this pattern pirate? Of course Hetty Winthrop is a pen name, evoking Colonial ladies and old New England families for the Bell Syndicate, a large newspaper company in business from 1916 to 1973. They distributed many comic strips and fiction other than needlework. But quilt patterns were hot in 1932 and '33. I would imagine Hetty was an artist working for Bell recruited for this needlework task at which s(he) was not too talented.

Wilene Smith has posted a page on Hetty, noting four US papers that bought the column in the first go-round beginning in December, 1932. It was revived in 1938 & '39 for Canadian papers through Dominion News Bureau, which also printed it in the early 30s.

In case you want to collect Hetty's patterns the papers are:
The Spokane Spokesman-Review (which is where I got most of my clippings)
The Salt Lake City Deseret News
The Chicago Daily News
and the Oklahoma City Trader
I searched for the words New Practical Design Quilt to get the most hits at Newspapers.com. 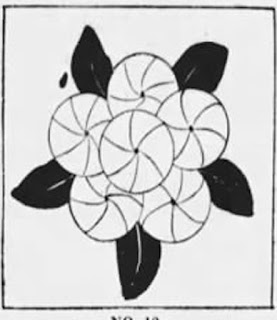 Another applique.
Morning Glory from 1933.

Wilene's page on Hetty:
http://quilthistorytidbits--oldnewlydiscovered.yolasite.com/hetty-winthrop.php
Posted by Barbara Brackman at 6:00 AM