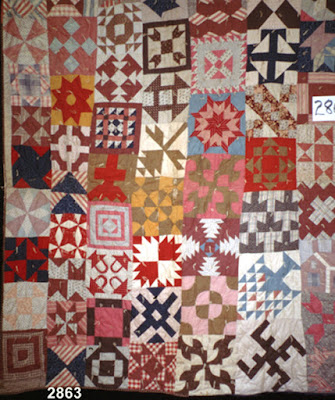 These sampler quilts of pattern blocks are fun for those who love patchwork patterns. This one as recorded by the Massachusetts project and the Quilt Index, attributed to Sarah Mallison of Beckett, Massachusetts in Berkshire County.

It's unusual for these quilts in that it is inscribed with two dates and two names: "Sarah Mallison 1905/ Bertha M ?1937" We can assume Sarah pieced the top in 1905 and Bertha tied it over 30 years later.

One wonders where Sarah got her patterns. In 1905 she'd have had access to many publications that dealt in patterns---magazines and needlework company catalogs. Patterns like the house and tree and drunkard's path were widely available but others have some mystery as to the source. 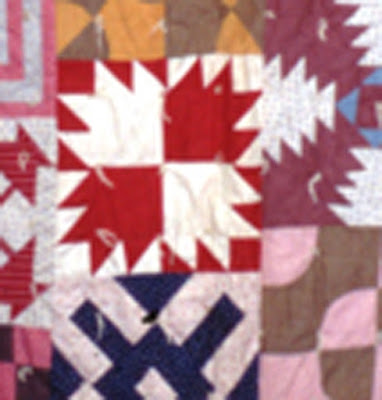 Like this red and white sawtooth block. Where did Sarah find it?
Was it published or handed around from a friend.

When looking at these pattern samplers we have to keep in mind that many seamstresses did not use paper patterns but made up a block to keep the pattern. Those collections of quilts "to make someday" often wound up as sampler tops. 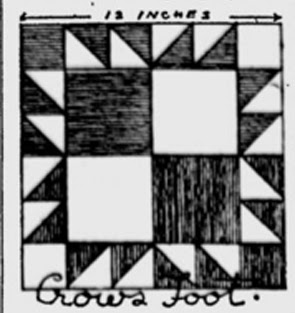 The Nancy Page newspaper column by Florence LaGanke Harris published
the design as Crows Foot but that was in 1934. Sarah must
have had another source. 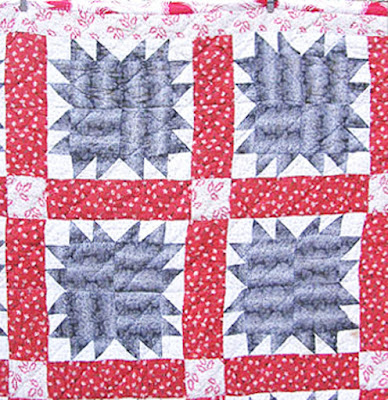 Quilt in the design from 1960s?
Possibly from the Nancy Page

The other source I have for the design is the Ladies' Home Journal in 1896,
which may indeed where Sarah found it. 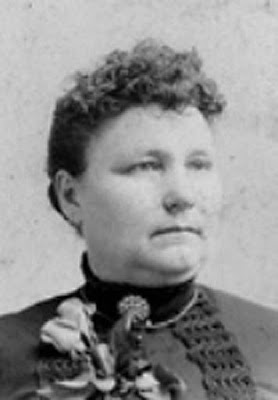 When Sarah's descendant brought the quilt in to be photographed not much was known about her but  today we can easily find her grave and a photo there. Bertha Crow Mallison (1888-1982) is buried in the same cemetery in Beckett, Massachusetts. She must have been a relative, a daughter in law perhaps, wife of son Charles.

I added Sarah's sampler to her grave file as it looks pretty certain she had a hand in it. I should look at each of the blocks and see what the source was..... But just like Sadie I am probably never going to get around to making all those quilts or finding all those patterns. 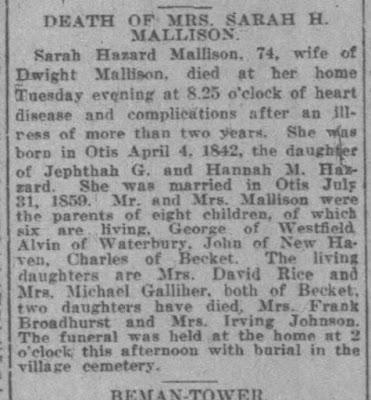